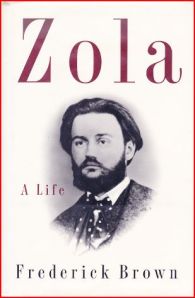 I have now read more than half a dozen of the twenty novels which make up Emile Zola’s Rougon-Macquart cycle. Wanting to know more about Zola, both as a writer and as a man, I read Mathew Johnson’s 1928 biography, Zola and His Time, and found it disappointing, with too much literary squabbling in Paris and not enough about Zola himself. The last portion of the book, dealing with The Dreyfus Affair, was the most satisfactory. Writing before World War II, however, Johnson had no vision of the eventual outcome of virulent antisemitism.

I looked for something more recent and more comprehensive and found Frederick Brown’s Zola: A Life. More recent (1995) and more comprehensive (803 pages of text, plus notes, etc.), it is neither a quick nor an easy read. Sometimes with a work this massive, it helps to comment at intervals, but it is too late for that now. Still, it does break into three main sections: boyhood and the apprentice years, the Rougon-Macquart cycle, and the years after Rougon-Macquart, including The Dreyfus Affair. The information presented throughout is so wide-ranging, however, that I see these possible divisions only in retrospect.

What does Frederick Brown give us in this “life”?

Did all this information change my perception of Zola? I think not, since my perceptions come from his novels. In The Belly of Paris, I find sensitivity to both social justice and the delights of a sensual life. In L’Argent I discover an understanding of greed and how it warps the moral standards of even “good” people. In Germinal I find a willingness to grapple with the dirty details of how things get done in this world, as well as a recognition of the difficulties of achieving social change. In L’Debacle I learn that Zola knows the best and the worst that men will do in trying circumstances and how they justify these actions. Zola’s careful research into military maneuvers or mining techniques or the layout of Les Halles provided him with necessary detail for his novels, but his understanding of human nature and his moral judgment could only come from the man itself.

Some of Brown’s psychological interpretations I found intrusive. Explaining Zola’s turn from gauzy poetry to naturalist fiction, he says,

Nurtured on romantic literature, his mind found easy purchase at extremes, and it leapt from quaking reverence for magical forces to a belief in science holding sway over the universe. This is to say that Zola wavered between superstition and rationalism, between feelings of impotence and fantasies of omnipotence. What made him conceive the progenitor who masters virgin nature also made him sire those children, prisoners of heredity, who would soon crowd his novels.

He sees patterns in Zola’s plots, and these patterns he relates to Zola’s own obsessions.

Zola, whose recurrent nightmare was of himself buried alive, could hardly conceive drama without a sacrificial victim or denouement that expunges some character from humankind. Identity and enclosure, the self and an abode standing islandlike on the margin of some larger settlement are linked again and again in disaster.

Reading a chapter every day or so provided me with a chronological narrative of his Zola’s life, but it was too much information to digest. Zola: A Life would work very well as a reference work, to look up Zola’s sources, as well as the activities of his colleagues and critics. There is a great deal of solid information here, worth pondering, whether or not you agree with Brown’s analyses. The pictures are good also. Here is one example:

Emile Zola with his mistress, Jeanne Rozerot, in 1893.

I was reading Emile Zola’s The Kill (La Cureé) alternately with Edmund de Waal’s The Hare with Amber Eyes, so I was struck by de Waal’s description of the Paris inhabited by Zola’s Aristide Saccard during his years of prosperity. The Kill is the third book in the Rougon-Macquart novel series in which Zola portrays the corrupt France of Napoleon III. (The “kill” is not a murder, but the piece of the fox awarded to the hounds after a successful hunt.) For a detailed description of the events in the novel, see Lisa Hill’s plot summary.

When Aristide Rougon leaves Plassans (Aix-en-Provence) for Paris after Louis Napoleon’s coup of 1851 he is poor and must continue to live a frugal existence on his clerk’s salary. An advantageous second marriage gives him the capital to speculate successfully in the real estate of Paris. The city is being transformed by the plans of Baron Haussmann, who creates boulevards and parks, including the Parc Monceau, next to which Saccard builds his mansion.

During the Second Empire, the [d’Orleans] family sold lots within the park to real estate developers, who built luxurious town houses, reducing the size of the park by half. The remaining part of the park was purchased by the city of Paris in 1860. All that remained of the original folly was the water lily pond, the stream and the fantasy “tombs,” including the Egyptian pyramid.

In 1860 the park was purchased by the city, and in August 1861 Parc Monceau became the first new public park in Paris to be remade by Baron Haussmann as part of the grand transformation of Paris begun by Emperor Louis Napoleon. Two main alleys were laid out from east to west and north to south, meeting in the center of the park, and the alleys within the park were widened and paved, so carriages could drive the park. An ornamental grill 8.3 meters high was installed along a newly created avenue, Boulevard Malesherbes, Curving paths were laid out around the park for strolling.

The house Saccard builds dramatizes the opulence he has achieved. After a rather precise explanation of its structure, Zola goes on to describe the decorations.

The display of decoration was profuse. The house was hidden under its sculpture. Around the windows and along the cornices ran volutes of flowers and branches; there were balconies shaped like baskets full of blossoms, and supported by tall naked women with wide hips and jutting breasts; and here and there were fanciful escutcheons, clusters of fruit, roses, every flower it is possible for stone or marble to represent. The higher one looked, the more the building bust into blossom. Around the roof ran a balustrade on which urns, at regular intervals, stood blazing with flames of stone; and there, between the bull’s eye windows of the attics, which opened on to an incredible mass of fruit and foliage, mantled the crowning portions of this amazing spectacle, the pediments of the turrets, in the midst of which the naked women reappeared, playing the apples, adopting poses amidst sheaves of rushes.

So. Fruit and flowers and naked women, but none of them real – just stone representations without any softness at all.

Zola used as his model for the mansion he calls a “fireworks display” the Hotel Menier, which still stands today in its favored position by the park. After finding the beautiful Hotel Ephrussi, the home of the Parisian branch of his family, Edmund de Waal visits the nearly Hotel Menier.

But nothing compares to the mansion built by the chocolate magnate Émile-Justin Menier. It was a building so splendidly excessive, so eclectic in its garnished decorations, glimpsed above its high walls, that Zola’s description of it as ‘an opulent bastard of every style’ still seems about right. In his dark novel of 1872, La curée, Saccard – a rapacious Jewish property magnate – lives here on the rue de Monceau. You feel this street as the family move in: it is a street of Jews, a street full of people on display in their lavish golden houses. Monceau is slang in Paris for nouveau riche, newly arrived.

That’s an interesting error, calling Saccard a rapacious Jewish property magnate. Rapacious yes, Jewish no. Saccard was a Rougon and nowhere does Zola hint that any of them were Jewish. If, as de Waal suggests, some wealthy Jews were sharp-dealing scoundrels, it does not follow that Saccard was Jew. Many 19th century authors would at least hint at the probability. In Zola’s Money. this same Saccard must deal with the Jewish banker Gunderman. Saccard’s feelings about Gunderman may be those of the character or his author; we cannot be sure. We can be sure, however, to find casual anti-semitic jibes in well-regarded authors right up to the time of World War II.

Contemporary Cartoon: Down with Zola!

The story of the trial and conviction of Alfred Dreyfus on flimsy and “secret” evidence is seen as a demonstration of anti-Semitism in late 19th century France. Certainly Theodor Herzl, who covered the trial for his Viennese newspaper, saw it that way. And if attitudes were so bad in enlightened France, how much worse in the rest of Europe! So modern Zionism was born, with its call for a nation for the Jews.

The last part of Matthew Josephson’s biography of Emile Zola, Zola and His Time, is devoted to the Dreyfus Affair and the important part Zola played in it. Zola at first wrote articles about the affair and then, finding no satisfactory response, published J’Accuse, opening himself up to a libel suit, a conviction, fines and temporary exile to England. It is disappointing that Josephson speaks so little of Zola’s motivation. Zola was not Jewish and, while he undoubtedly objected to the active prejudices which singled Dreyfus out for prosecution in the first place, I believe that he was stirred by something more fundamental to his own nature, his own inner core.

As they said of Watergate 75 years later, it wasn’t the original crime that was so bad, it was the cover up. Again and again, The French Army had overwhelming evidence of Dreyfus’ innocence and most came to accept it. They had opportunities to correct the error. Again and again they turned away from those opportunities and connived in exonerating the real spy.  The whistle blower within the Army who uncovered the facts was himself persecuted.

They brought him [Picquart] up quickly. He should have realized that the reopening of the Dreyfus Affair was “not desired;” that the sacrifice of this man, innocent or culpable, was “deemed necessary” for the honor of the Army, The Secret Service Department, and the General Staff, all glorified in the triumphant judgment of 1894.

Zola’s fate was collateral damage, so far as they were concerned. I think it was the thorough dishonesty of the Affair and its coverup that most outraged Zola. As he says in J’Accuse,

During World War II when the west coast Japanese were rounded up and interned on “suspicion” of espionage and sabotage, it was pointed out that there was no evidence that anyone had done any act of the sort. Ah, we were told: That shows how clever they are, fooling us all by their good behavior.

When I read Zola’s novels, I meet a writer who tells the truth as he sees it. He may dramatize, he may simplify, but he does not deceive or mislead. Josephson reports that Zola said at his trial,

“All seems to be against me, the two Chambers, the civil powers, the military powers, the great newspapers, the public opinion which they have poisoned. And I have nothing for me but the Idea, the Ideal of truth and justice…. Someday France will thank me for having helped to save her honor.”

Contemporary cartoon: My Prophecy is Borne Out. Right has Finally Triumphed.