For most of us who know a little about Zola’s life, the man is a hero. He is famous for denouncing the anti-Semitic persecution of Dreyfus, and he’s a literary lion for his championing of a realism which portrayed French life warts and all – and bravely spent a lifetime cocking a snook at the regime into the bargain. But in The Masterpiece he bares his soul and shares the struggle that underlies all work in the creative arts. He shows us the loneliness of innovation and the despair that accompanies the quest to make the object match the imagination. It’s a superb book…

First published in 1886 when Zola was forty-six, The Masterpiece has also been translated as A Masterpiece or His Masterpiece and this is, it seems to me, a rare example of a translated title being better than the original. Zola called this book L’Œuvre, a word which translates somewhat clumsily as ‘the body of work’, (which is why English has appropriated the French word oeuvre as a more elegant option). But Zola’s novel isn’t really about a ‘body of work’ or an oeuvre, it’s more about an artist’s obsession with capturing one symbolic image on canvas, which would be his masterpiece. Perhaps Zola was being ironic…

Anyway, the story begins with the optimistic young Claude Lantier arriving in Paris to take it by storm. The art world was astir with the birth of Impressionism and the Paris Salon was exercising its power to humiliate the brash young artists who created strange ‘unfinished’ pictures of unheroic life. (You can read more about the battle between the conservatives and the innovators in Ross King’s The Judgement of Paris, see my review). Lantier doesn’t care: he is certain that ‘old’ art is dead and that the light-filled beauty of the new will sweep it away. But Lantier, first introduced to readers of the Rougon-Macquart cycle as a very young artist in The Belly of Paris (1873) and briefly alluded to as the son sent away to his uncle in Plassans in L’Assommoir (1877), is the son of Gervaise, as doomed as she is by her fatal flaws. (Click the links to see my reviews).

Zola famously got into strife with this novel because (as Roger Pearson explains in the Introduction) it was interpreted as an attack on impressionism, and Cézanne, Zola’s friend since childhood, severed the friendship over it. And it is true that Zola doesn’t depict the new artworks with any great sense of respect. But like many an outraged friend who thinks his flaws have been depicted in a novel, Cézanne failed to see that Lantier is an amalgam of many people that the author knew. From Cezanne, says Pearson, Zola did derive many aspects of Lantier, but he also drew on what he knew of other contemporary painters including Manet and Monet. Still, Cézanne had some grounds for anger:

As well as being the model for Lantier’s Provençal childhood, Cézanne also provides his physical appearance, his obstinate and volatile temperament, his timidity with women, his vaulting and obsessive artistic ambition, his murderous self-doubt (and tendency to put a fist through his canvases), his growing isolation from his fellow painters and a reputation for being a ‘madman’, his failure to have a painting accepted for the Salon except once (in 1882) as an act of ‘charity’ on the part of a lesser, derivative artist (here Antoine Guillemet* is indeed the model for Fagerolles), and – in common with Manet and the Impressionists – his enduring lack of recognition as an original and talented artist. (Introduction, p. xi)

* Guillemet is an artist now so obscure that he rates only a brief page at French Wikipedia, and apart from listing all the honours he was (so undeservedly) given and the (now forgotten) paintings that he exhibited at successive Salons, it mainly covers his role in having one of Cézanne’s paintings accepted by the Salon jury, of which he was a member.

But the artwork which drew so much derision to Zola’s character Lantier is not attributable to Cézanne, it’s a close description of Manet’s striking Dejeuner sur l’Herbe (which you can see at Nancy’s commentary over at The Books of Émile Zola). While I enjoyed these ‘spot-the-painting’ moments, what interested me more was the struggle to create them, that is, to realise the artistic vision in the imagination with hand, eye, and paint.

But for Lantier, there is also the struggle to survive financially. His small legacy is soon gone, and his imprudent marriage to Christine results in an unwanted and badly treated child. Christine loves him, but she doesn’t understand him, and while she is willing to put up with poverty for his sake, she wishes he would paint saleable pictures. It is only the first of many sad moments when he is reduced to painting commercial commissions in order to put bread on the table…

The confessional aspect of this novel comes in the character of Sandoz. Clearly recognisable as Zola himself, Sandoz is determined to ignore the criticism and produce his series of novels, and he diligently sets about doing so. He works solidly as a journalist to pay his way and support his ailing mother, and as his fortunes rise by contrast with his struggling artist friends, he hosts ‘Thursday’ dinners as much to provide them with a decent meal as to enjoy their company.

As young men, Sandoz and Lantier shared the same dreams and confused ideals:

[Sandoz], too, fell silent. The previous winter he had published his first book, a series of pleasant sketches of life in Plassans, in which a harsh note here and there was the only indication of the author’s revolt, of his passion for truth and power. Since then he had been groping his doubtful way through the mass of still confused notions that besieged his brain. He had started toying with the idea of a gigantic undertaking and had projected an ‘Origins of the Universe’ in three phases: the creation, established according to scientific research; the story of how the human race came to play its part in the sequence of living beings; the future in which beings succeed beings, completing the creation of the world through the ceaseless activity of living matter. He had cooled off, however, when he began to realise the hazardous nature of the hypotheses of this third phase, and was now trying to find a more limited, a more human setting for his ambitious plan. (p, 38)

Lantier muses aloud about his dreams:

‘The ideal would be,’ said Claude after a while, ‘to see everything and paint everything. To have acres of walls to cover, to decorate the railway stations, the market-halls, the town-halls, whatever they put up when architects have at last learned some common sense! All we’ll need then is a good head and some strong muscles, for it isn’t subjects we’ll be short of…. Think of it, Pierre! Life as it’s lived in the streets, the life of rich and poor, in market-places, at the races, along the boulevards, and down back streets in the slums; work of every kind in full swing; human emotions revived and brought into the light of day; the peasants, the farmyards and the countryside…. Think of it! Then they’ll see, then I’ll show ’em what I can do! It makes my hands tingle only to think of it! Modern life in all its aspects, that’s the subject! Frescoes as big as the Panthéon! A series of paintings that’ll shatter the Louvre! (p.38)

Sandoz shares Lantier’s ambition to do something new and to be acknowledged for it, but he differs in personality. His capacity for dogged persistence and to adapt when necessary is in marked contrast to Lantier’s fatal flaws, not least because he is willing to revisit and revise his own work whereas Lantier destroys his out of frustration and keeps having to start again. His quest for perfection dooms him in the end.

The glorious artwork on the cover is a detail from Portrait of Frédéric Bazille, c. 1866, by Auguste Renoir. Bouquets to whoever chooses the artworks for the Oxford World’s Classics series of Zola’s novels, the choices are all just perfect for the titles they represent!

Do read Arnold Bennett’s thoughts on The Masterpiece as well.

The Masterpiece is the fourteenth title in my quest to read the entire Rougon-Macquart cycle of 20 novels in the recommended reading order. Next up is The Beast in the Man (La Bête Humaine, 1890) and since there isn’t a nice new edition, I have acquired a splendid old Elek edition (1956) with a characteristically lurid cover to match Zola’s most violent work. I plan to read it in July… 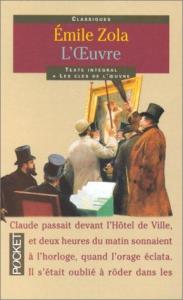 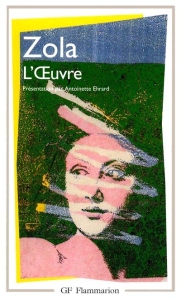 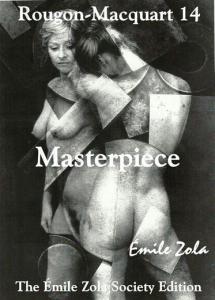 L’Œuvre was first published in 1886 and has been translated as The Masterpiece.