Émile Zola’s Zest for Life (La Joie de vivre, also translated as The Joys of Living/Joy of Life/How Jolly Life Is) was first published in 1884.  It’s the 12th novel in both the recommended reading order and the chronological publication order for Zola’s Les Rougon-Macquart cycle.  It’s also the most sad of all the Zola novels I have read so far.

The story centres on Pauline Quenu, daughter of the prosperous charcutiers Lisa Macquart and M. Quenu who featured in The Belly of Paris (Oxford World’s Classics) (Le ventre de Paris) which I read in the new translation by Brian Nelson in December last year (see my review).  Unfortunately there isn’t a modern translation of La Joie de vivre so I took the advice of my friend and Zola expert Jonathan who contributes to the collaborative blog The Books of Émile Zola (and also blogs at Intermittencies of the Mind,) and sought out a copy of the Elek transation, published in 1955.   For anyone considering reading La Joie de vivre in English, it is vital to avoid the self-censored Vizetelly freebie version because as Jonathan explains in this Exceptional Excerpt at The Books of Emile Zola, the Vizetelly version prudishly omits the most powerful scene in the entire novel.

In Zest for Life Pauline’s parents have died and, aged ten, she comes to live with relatives in the small seaside town of Bonneville in Normandy.  The sole inheritor of her parents’ legacy, Pauline’s interests are guarded by a collective of well-intentioned but not very effective souls and it is not long before her fortune is at risk.

As usual, Zola contrasts the characters to show how the effects of heredity and environment conform to his theories about eugenics – but in this novel the negative characteristics that are associated with all the descendants of Pauline’s great-grand mother mad Adelaide Fouque (Tante Dide), fall to other characters and not to Pauline.  Pauline, while too realistic to be saintly, is one of those good, kind-hearted souls who gets her greatest pleasure from pleasing others.  Happiness, to her mind, depended neither on people nor on things but on adapting oneself to people and things in a sensible way. (p.182).  For her, with limited resources at her disposal to improve the lives of others, it is enough to reduce their suffering as best she can, and she still feels this way even when their misery is self-inflicted:

‘Isn’t the relief of suffering an end in itself?’ she went on.  ‘It’s a pity they don’t mend their ways, for they’d perhaps be less wretched.  But when they’ve been fed and warmed, well, that’s enough for me, it makes me happy; it’s that much less suffering in the world.’  (p.188)

Unfortunately this generosity of spirit is too great a temptation for Mme. Chanteau.  The Chanteau household is bedevilled by sickness and money worries and its sole hope for advancement lies with the spoilt and selfish Lazare, aged 19 at the beginning of the book.  Contrasted with Pauline’s boundless optimism and healthy value system, Lazare is a dreary pessimist and nihilist, convinced that life is futile and that there is no point in doing anything.  Rather than finish his studies and take up gainful employment to help his parents, he flits about from one project to another, obsessed with it while it holds his interest but abandoning it at whim.  He has a stint at an unfinished Symphony of Sorrow, and later on as a novelist, but it’s when he needs an investor for his seaweed-processing factory that Mme. Chanteau abandons her ostentatiously professed principles and borrows the money from Pauline’s inheritance.  Pauline is also manoeuvred into funding a subsequent project to build fortifications against the seas which encroach on the hapless village – in advance of a grant which fails to materialise.

The servant Véronique – a great character – is wise to the goings on, noting the ways in which Pauline’s money is used to pay for pressing bills and how she is exploited as a nurse to M. Chanteau, crippled by gout.  Zola’s vivid descriptions of the suffering of this piteous man are offset to some extent by Chanteau’s self-absorption and lack of self-discipline, but no reader can be indifferent to his suffering.

As Pauline was getting up, Chanteau uttered a low cry.

‘Is it starting up again?’

‘Starting up again?  Why, it never stops… Did I groan? Isn’t it odd, I’ve got to the point where I groan unconsciously.’

He had become a dreadfully pitiable sight.  Gradually his chronic gout had accumulated chalkstone in all his joints, and enormous tophs (sandstone deposits) had formed, piercing through his skin in white growths.  His feet, now concealed in slippers, were drawn up like the claws of a sick bird.  But his hands displayed their deformity in all its horror; each joint was swollen with red, glistening nodules, and the fingers were distorted by lumps that splayed them out and made them lopsided, particularly on the left hand, made hideous by a chalkstone the size of a small egg.  On the left elbow a heavier deposit had caused an ulcer.  And his limbs were now completely anchylosed, [fused] he could use neither hands nor feet, and the few joints that still functioned a little creaked and rattled like a bag of marbles being shaken.  (p. 275)

Mme. Chanteau is not wholly bad: she did, after all, willingly take the orphaned child into her home, and her initial intentions to leave her fortune alone were sincerely made.  But she has a blind spot where Lazare is concerned, and she salves her conscience about embezzling the money by finding ways to blame Pauline, and eventually to sabotage her marriage plans.

The title is, of course, ironic.  There is no joy in this book; it is a study of how sickness of body and mind exacerbate poverty and vice, and how its victims are often undeserving of their fate.

My next title in my Zola Project to read the entire Rougon-Maquart cycle is No 13 in the recommended reading order,  L’Assommoir (Oxford World’s Classics) in a recent translation by Margaret Mouldon. 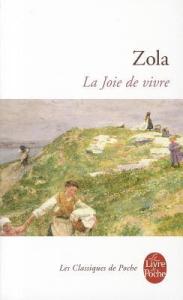 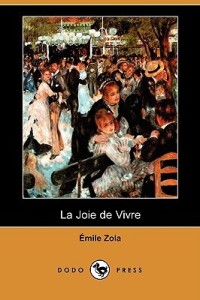 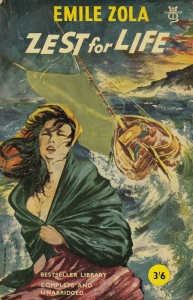 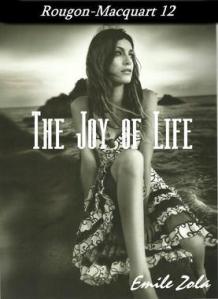 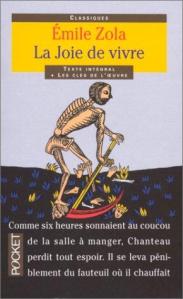 La Joie de vivre was first published in 1884 and has been translated as The Joy of Life and Zest for Life.

Zest for Life is the Elek Books version of La Joie de vivre (1884)  which was published in 1955. Although not one of the best books of the series I found it an interesting read. The novel clips along at quite a leisurely pace until the reader reaches Chapter Ten – this is an astounding chapter, containing some of Zola’s most powerful, descriptive writing. Please note that I give away part of the plot in what follows.

In this chapter Louise, who is eight month’s pregnant, goes into labour. Her husband, Lazare, fetches the local midwife, Mme Bouland, but she discovers that the baby’s arm is showing and recommends that Dr. Cazenove is called for. Eventually the doctor arrives and suggests that it will be difficult to save both mother and child. He proceeds, however and for eight pages we experience the doctor’s attempt to re-align the baby and deliver it safely. The mother, who has been in constant pain for hours is unconscious at this point. I would have liked to quote the whole eight or so pages as it works so well as a whole, but instead I’ve picked out a small section which should give a flavour of the prose.

‘We’ve waited too long, it’s going to be difficult to get my hand in…You see, the shoulder’s already engaged in the opening.’

Amidst the swollen, straining muscles, between pinkish folds of flesh, the child could be seen. But it had stopped there, unable to get past because of the narrowness of the organ. Meanwhile, however, the abdominal and lumbar muscles were still striving to expel it; even unconscious, the mother was still pushing violently, exhausting herself in labour, in the mechanical urge to be delivered; and the waves of pain still swept downwards, each accompanied by a cry in her stubborn battle against the impossible. The child’s hand was hanging out of the vulva. It was a tiny black hand, its fingers opening and closing intermittently as though it were clutching at life.

‘Let the leg give a little,’ said Madame Bouland to Pauline. ‘No need to wear her out.’

Dr. Cazenove was standing between the two knees, each held by one of the women. He turned round, puzzled at the way the light was flickering; Lazare behind him, was trembling so violently that the candle shook in his hand as though in a great gust of wind.

‘My dear fellow,’ said the doctor, ‘put the candlestick on the bedside table. I shall see better.’

Incapable of watching any longer, the husband retreated to the further end of the room and sank into a chair. But although he had stopped watching, he still kept on seeing the little creature’s pathetic hand, clinging to life, seeming to grope for help in this world into which it had led the way.

Unfortunately, if you decide to read the Vizettely translation then this whole eight or nine page section of the book is covered by the following paragraph:

There came a cruel and affecting scene. It was one of those dread hours when life and death wrestle together, when human science and skill battle to overcome and correct the errors of Nature. More than once did the Doctor pause, fearing a fatal issue. The patient’s agony was terrible, but at last science triumphed, and a child was born. It was a boy.

A graphic description of a difficult childbirth was obviously not considered appropriate material for the late Victorian reading public. They could read it in French though if they wished.